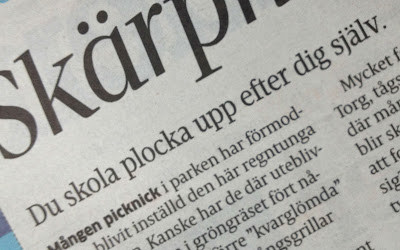 Mooring the first night at Heal's Lock. Supper (Plowman's Platter) at The Rowbarge. 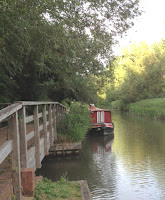 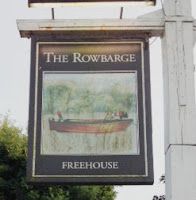 The Rustic Bunting still hides by the towpath behind the nettles and Cia sleeps in the berth in the front of the boat. The Captain prepares the breakfast in the galley and Heal’s lock is waiting for us to empty the chamber so that we can go on westward. Far ahead you can see a small swing bridge. We manually operate both the lock and the bridge ourselves. 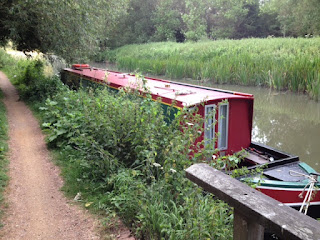 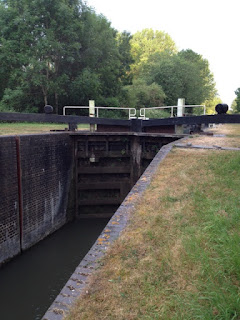 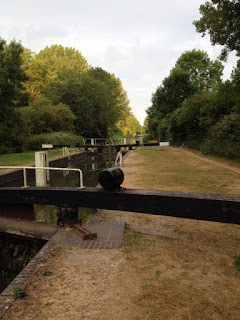 Mooring in Thatcham to see an old friend for lunch at "The Swan". 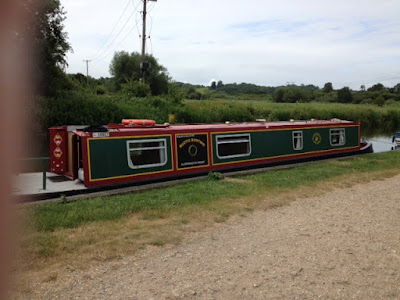 Moored up just outside Newbury after a day’s hard work. Today we have passed eight locks (!) and three swing bridges. The crew (Cia) has made a tremendously good work with windlass, paddles, balance beams, mooring ropes and stakes.
The skipper has maneuvered the boat skilfully through narrow passages, streaming waters and tricky moorings.
Tonight we hade a very nice “naked burger” at a restaurant in Newbury’s Market Place and a glass of white wine and some chocolate on the boat.
Looking forward to a good night's sleep.

The canal isn’t always snaky. This straight part, called ”The Long Cut” is approximately one mile. 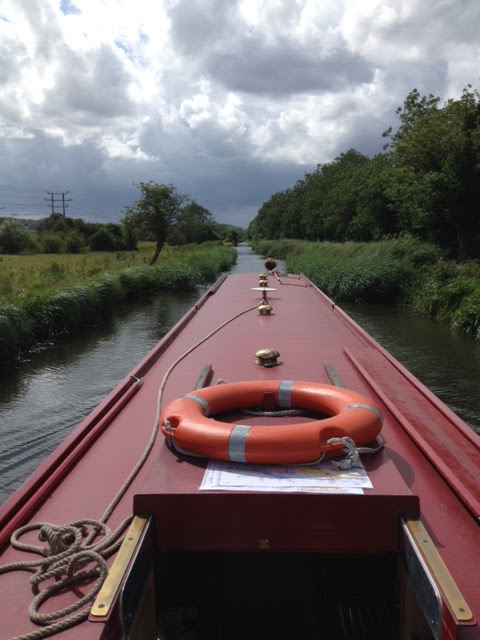 The crew went shopping. She had an urgent need for a pair of new gloves. The lock and rope work made the cheap garden gloves completely outworn immediately. The skipper stays aboard. He unwillingly leaves the vessel unattended. 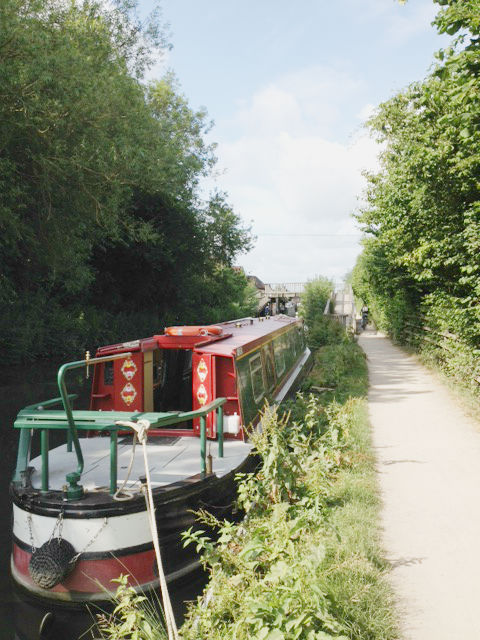 Today’s tour started in Newbury and ended in Kintbury. Eight locks today and some bridges.
Two incidents on the way: When we were about to make lunch the cook was silent. No gas = no fire. Called the emergency number and the expert Tom led me through all possible checkpoints. Negative. Two hours later, three locks ahead, mechanic Martin was waiting for us with new equipment for the installation. He changed a regulator and then the cook worked again. I also heard new sounds (noise) from the propeller and had to stop and inspect the lower parts of the boat under deck. Found nothing so we went on and the noise disappeared when we reached less shallow and muddy water.

We moored up for the night in Kintbury, filled the water tank – and ourselves at the nearby pub. At the pub's garden some 40 ducks insisted to eat at our table, but since they neither brought their own food, nor ordered anything from the bar, we sent them away.
Images: The pretty “Dreweat’s Lock”. (“In England's green and pleasant Land”.) 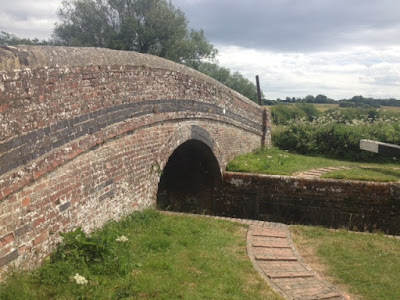 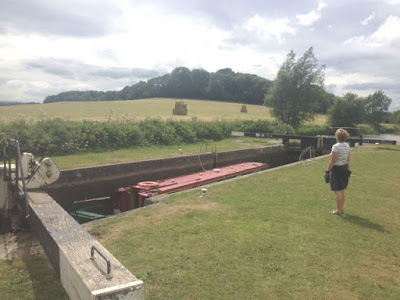 Woke up to the sound of rain against the cabin roof. The forecast says showers during the day. Today we have to find a place where we can turn the boat around and head our way back downstream towards Aldermaston.

Showers forecasted. Showers it was. Since we are in the middle of the tour the challenge was to turn the boat around. As we found the suitable place the heavy rain started. Soaking wet the captain stood, like Captain Ahab, steady and stubborn at the tiller and turned the 49 ft Rustic Bunting 180 degrees in the 50 ft wide canal. The crew in the front punted like hell while the heavy rain threatened to sluice her over board.

To celebrate this glorious deed and that we are still alive we made an excellent lunch aboard with grilled lobster, fresh from the canal, some oysters and caviar, and a bottle of 1937 Don Perignon that we had stored in the keelson!

OK, the post above wasn’t all true. The menu was bacon and egg, tomatoes, haloumi, bread, cheese, and water. There are no lobsters or oysters in the canal and no champagne in the keelson. J 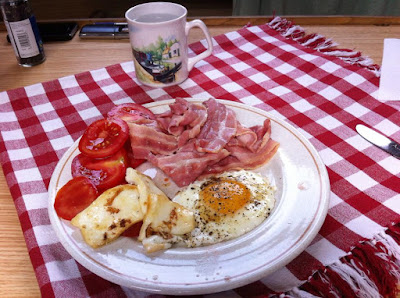 In the afternoon we went to Hamstead lock where we had planned to moor up for the night. That wasn’t easy. The canal was very shallow on the sides, which made it impossible to come close enough to jump from the boat. After many attempts we finally found a very good place.

We walked back to find the small village Marsh Benham where the goal was the pub “Red House”. It wasn’t a small village, it was a small almost-not-a-village-at-all. But the pub was charming, the food excellent and the Guinness the very-best-stout-of-the-day!

The operation of the locks is made by the crew – Cia. In the locks you are either alone or you meet friendly people from other boats. People help each other, chat a little, say polite and common things, and everyone is happy!

Today another type of person appeared. She claimed that her boat (going upstream) was first to the lock and that we (going downstream) should have waited for our turn. She was mad, impolite – and wrong. When you approach a lock you cannot always see what’s going on on the other side. And it is not which boat mooring first by the lock that counts, but which crew first show up by the paddles and lock doors. In this case no one was in sight when Cia started to operate the lock. The angry woman arrived when she had already started.

This incident was really an exception! You always get friendly greetings, necessary and unnecessary advice, comments on the weather yesterday, today and tomorrow. No doubt you are in Britain!' 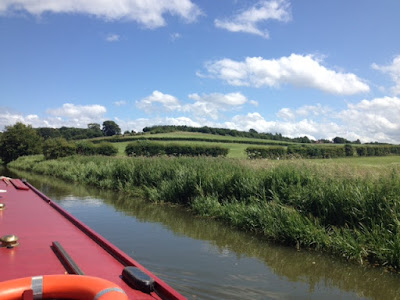 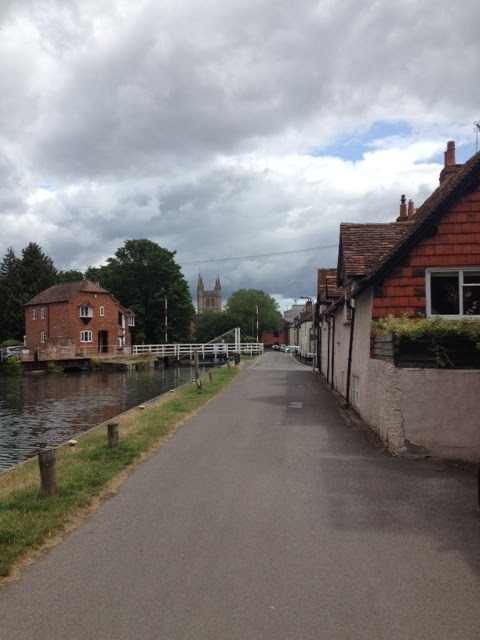 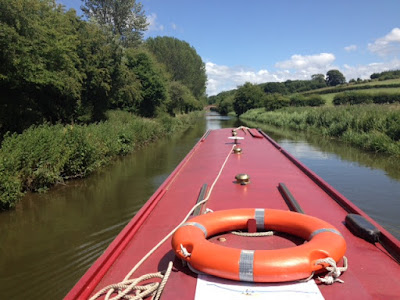 An absolutely marvellous morning. A little chilly air but a beautiful blue sky. We spent the first three hours of the day sailing very slowly through the “green and pleasant land”. No wind and a friendly generous warming sun followed us along the way. Except from the purring engine, not a sound was heard. I really wish every person should have the opportunity to perceive this feeling of rustic tranquillity!

While the crew is engaged in physical exercise the skipper prepares an ordinary(!) lunch. 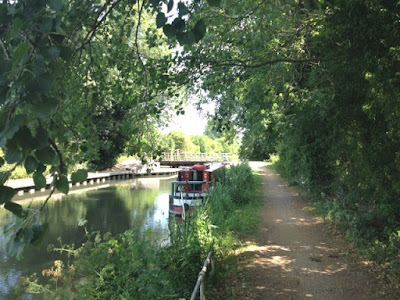 Woolhampton, the cutest of villages so far, with pretty small houses from the 17th, 18th, and 19th century. We bought some breakfast things in the very small shop from a rather big shop owner. Cia had a long conversation with the owner in the “Shop on the corner”– a beautiful black and white bond timber house – and bought some necessities (garden gloves!)

We had a long chat with a fellow boater and his wife at the canal side. They were obsessed boaters and he had sailed a lot in the Baltic Sea, in Denmark, Sweden and Finland. He was also an amateur viola player. He accused Cia for having a posh accent and for not being lady-lake when she told him that we had been to the pub and had a pint of bitter. A lady drinks at the most a glass of beer, a Shandy or a Pimms. Besides these comments he was very nice, funny ant talkative.

After this conversation at the mooring place the captain and crew went to the very interesting pub “The Angel” (where we had the afternoon beer) and had an excellent meal with a bottle of Italian Rosé.

This day was the most perfect day! Tomorrow is the last day. ☹

I must mention bikers and dogs.

As said before, the canal is not crowded. On today’s sailing to Woolhamton we didn’t meet any boat at all and in many locks during the week we have been all alone. But the old towpath where the horses pulled the narrow boats and barges with goods, such as coal and firewood, from western England to London is now a public footpath and a very popular path for bikers.

Most bikers are dressed in modern fluorescent lycra outfits with helmets and grotesque glasses. They ride modern bikes with wide tires and wear a light rucksack or a full camping equipment. And they are many! As all people here they are friendly, say good morning, sorry, excuse me, etc.

And the dogs! I have never seen so many dogs in one week in my whole life! They are on the boats, lying on the roofs on the narrow boats as galleon figures, one alone or as many as three in a bunch. And you meet them on the towpath. Energetic women of all ages, and slow going elderly men with dogs of all sizes, breeds and colours, always without a leash. In small fields you see people exercising their dog by throwing balls and sticks for the dog to fetch. Dogs, dogs everywhere! And no fighting, no barking. Well trained dogs following their master, taking no notice of other dogs or other people.

But we wonder where they come from and where they are heading, We saw some bikers on the commuter train from Reading (The railway follows the canal.) so I guess they take the train from the town and bike back. But the dogs? They appear in the middle of nowhere and walk in a direction with no end. Very strange.

We are only two miles from the end. The final destination is Aldermaston Wharf, where we started and where we hired the boat, the Rustic Bunting. The wharf is run by the manager Dave, and his staff, the mechanics Martin and Tom, and Linda in the reception/chandlery. The service at the wharf is very good in a friendly atmosphere.

It has been a wonderful trip through a beautiful English landscape with stunning good weather, an average temperature of 24 degrees, a warming sun and only a few rain showers. Last year we went from the same place towards east and about half of the way was on The Thames and we turned around a bit east from the town Henley. This year’s tour was more rural, no large cities, less traffic.
We strongly recommend this kind of holiday. It is extremely refreshing for soul and body. The boats are easy to operate (Well you learn quickly by trial and error!) even for someone who is not at all used to sailing. It is very safe, never dangerous, but we do recommend you to be at least three people, rather four, aboard the first time. We have met many boats with only two people on, but they are often very experienced and skilled. We’ve even seen people going on their own. All pubs along the canal serves lunch and dinner (from 6) and have surprisingly good food and wines and of course excellent ale. This tour is an adult thing, for children I guess the tour can be rather boring …
If you plan to go from Aldermaston you take a bus from Heathrow to Reading (45 minutes) an the train from Reading to Aldermaston (12 minutes). There is no shop in Aldermaston, so you must buy at least what you need for breakfast in Reading and bring it to the boat. There is a Sainsbury's in Reading on Friar Street, not far from the station. In Theale, if you go east are many stores, and in Newbury if you go west.
Have a look at the web sites for ABC Boat Hire, and Kennet & Avon Canal. 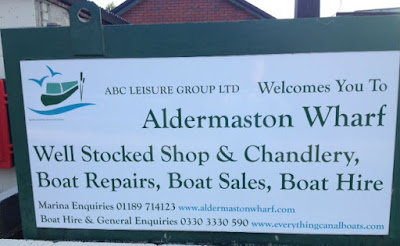 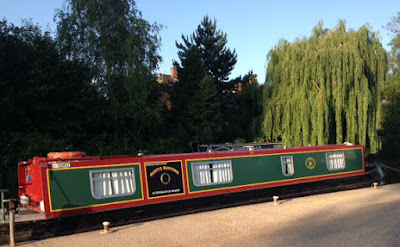